The new John W. Walstrum Center for Advanced Manufacturing Technology (CAMT) is a culmination of regional vision, years of planning between Washington State agencies and Clover Park Technical College, and the successful collaboration of the design-build team to deliver the state-of-the-art manufacturing learning center. Lakewood and the greater South Puget Sound region has experienced a boom in advanced manufacturing careers. The CAMT aims to educate and train South Sound residents in prosperous and well-paying careers in industries such as aerospace, marine tech, and technology throughout the region.

There was a lot riding on the project. The design-build team was challenged with an aggressive project schedule, as well as high expectations as the first major design-build project for the Washington State Board of Community and Technical Colleges (SBCTC); but the design team rose to the occasion. 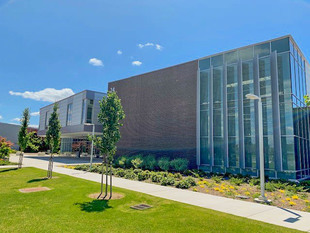 AHBL and the A/E/C community has seen various delivery methods become the methods of choice including design-build and progressive design-build. For this project, the design-build delivery method was selected to design and construct a built environment in an effective (responsive program) and efficient (both in terms of project schedule and budget) process. The CAMT project team, led by Mortenson, had to put the team’s heads together after the state reduced the available budget by $1.3 Million. The design team was determined to preserve the existing programs and state-of-the-art design concept for the project. The AHBL civil engineering team worked with Mortenson and the architect Schact Aslani (now Mithun) to value engineer and redesign site elements without impacting the project’s overall schedule.

After the project’s redesign and AHBL’s quick work to address unforeseen contaminated soils on the project’s site, the 63,000 SF, LEED Silver-certified CAMT was substantially completed three weeks ahead of schedule.

Impact of the Project – A Community Asset for Years to Come

Dr. Joyce Loveday, Clover Park Technical College’s (CPTC) President remarked on the CAMT’s significance, “This project took 3 years’ worth of planning and discussing how we envisioned the function of this space. This building is the beautiful result of those efforts.” 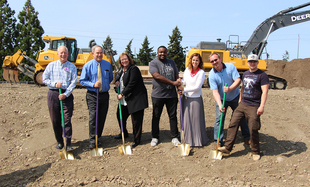 As a “commuter campus,” the AHBL team worked to provide site enhancements that support CPTC’s student demographics, as well as the CAMT’s building program. Site improvements included parking lot, accessibility, and pedestrian updates to the building’s north and west sides. In all, AHBL designed over 12,000 LF of pedestrian sidewalk to support the CAMT, enhancing the campus experience, providing additional accessible routes, and creating an impressive new “main entry” to Clover Park Technical College.

The new facility is designed to serve CPTC’s students and represent the College’s vision, mission, and values for decades to come. The design-build delivery method allowed the design team to work collaboratively and efficiently to deliver an outstanding educational resource for the South Sound region.

“There are a lot of manufacturing jobs here in Pierce County, so this building, and what it represents to our community could not have come at a more appropriate time. Manufacturing has shown to be the backbone of the economy, and we know that the students from these programs will bring the culture of innovation and entrepreneurship that is embedded here at CPTC,” said Kirk Davis, CAMPS Executive Director.