SAME at 100 – Celebrating a Century of Service 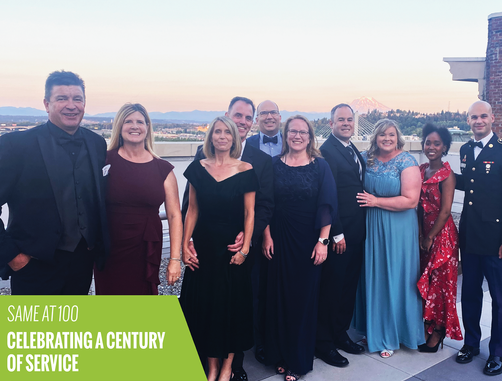 AHBL’s Society of Military Engineers (SAME) members including Tim Hansen, Ken Leland, Bill Fierst and Denise Storaasli got decked out to celebrate SAME’s 100th Anniversary July 23rd at the Centennial Ball! The celebration was held at the Tacoma Convention Center Marriott Hotel – an AHBL project that our civil, survey and landscape architecture teams designed. The event was the first group event held at the hotel since its opening in November 2020. The event was hosted by the SAME Mount Tacoma Post.

The Centennial Ball in Tacoma offered SAME community members the opportunity to connect with other stakeholders in the area to honor the contribution the profession has made to our nation.

AHBL has been a member of SAME for the past 20 years. AHBL helped support the Centennial celebration as an event sponsor and also sponsored a military member and his guest so they could join us in celebrating SAME’s 100th Anniversary. Our sponsored army military member was recently stationed at JBLM and hopes to become a Professional Land Surveyor once his military career is concluded.

One goal of the event is to ensure new participation from local military and industry partners, government agencies, stakeholders and the community. If you are interested in learning more, visit the Mount Tacoma Post.