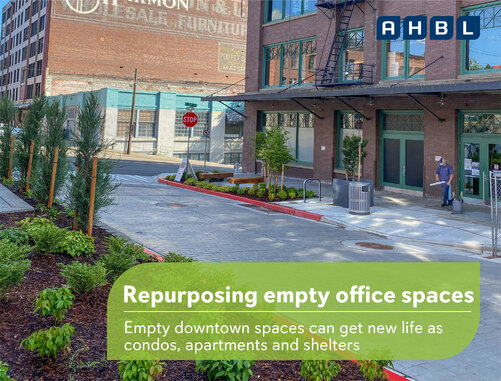 Many downtown districts like Tacoma, Seattle and Portland have an abundance of empty office space as a result of the pandemic and new hybrid or 100% work from home arrangements due to large employers like Google and Apple rolling back their “Back to the Office” policies. The hustling downtown packed with office workers, may be a thing of the past. Will developers be interested in converting these large commercial properties into housing?

According to poll data from Gallup, office buildings in major US cities are experiencing the highest vacancy rate for downtown offices in roughly 30 years. Even as business districts start to recover, Gallup estimates that 37% of current office space in the US is likely to be abandoned as workers switch to remote work. That could slash cities’ tax revenue and economic activity.

Faced with millions of square feet of vacant office space, cities have begun exploring new uses such as converting office buildings to condos and apartments, taking advantage of the prime location of many office buildings to increase the supply of dense housing.

Mass conversion of office buildings won’t happen on their own, says Matt Vance, senior economist and head of Multifamily Research at CBRE, “A combination of factors needs to come together to make these conversions profitable for developers: an attractive location and floorplan, favorable zoning laws, and up-front financing of the deal.”

Vance argues local governments must help identify and finance these conversion projects. “In some ways, it seems inevitable that we’ll need to rely on a public-private partnership system,” says Vance.

Momentum for conversions is growing. A report from RentCafe found that in 2021, US cities saw more than 150 apartment conversion projects, and 41% of those were from former office buildings. In all, roughly 7,400 apartment units were created from office conversions in 2021, more than six times the number of units created a decade earlier.

In Seattle, commercial real estate company Broderick Group predicts that vacancy rates with remain high throughout 2022 and into 2023. Will these properties be converted into housing? Time will tell and will likely be dependent on city policy and attractiveness to developers.

As a planning and engineering firm, AHBL has been involved in several adapted reuse projects in Downtown Tacoma including: Tacoma's Brewery Blocks and the Beacon Activity Center Renovation project.