Reimagining the School Built on a Lakebed

In February of 2019, Seattle Public Schools passed a $1.4B levy with over 70% support to fund school improvements including building, technology and academic projects. According to Seattle Public Schools, “Capital levies are the primary funding source to ensure that every student has a safe, optimal learning environment.”

The BEX V levy funded dozens of projects across the City, including a complete replacement of the existing Rainier Beach High School. AHBL’s Civil Engineers are partnered with Bassetti Architects, Moody Nolan, and Lydig as the GC/CM to design the new Rainier Beach High School, which faces a unique set of design challenges based on the building’s site.

While stormwater management is always an important component of site design for a replacement project, it’s even more important for Rainier Beach High School, which exists on land that was once lakebed. Prior to the completion of the Lake Washington Ship Canal Project in 1937, Lake Washington was approximately 9-feet above current lake levels today. The slopes along the west side of the property were presumably the shores of Lake Washington prior to this time. The photo below shows a view of this area in approximately 1895. 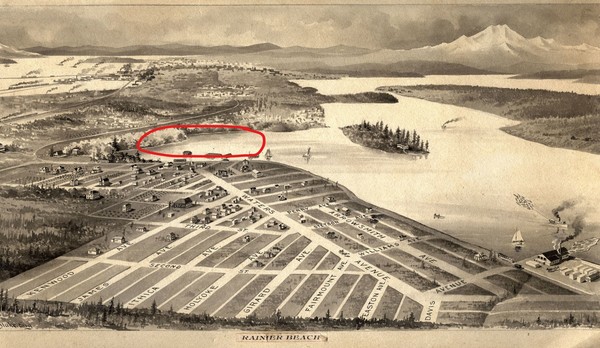 In the 1950’s, the City of Seattle purchased the land and developed the existing Rainier High School. At the time of development, stormwater practices were rudimentary and did not adequately protect the lake from contaminates and run-off from the developed areas. The high school replacement project will be designed to protect the natural ecosystem to the greatest extent possible by preparing water for discharge via bioretention cells.

The purpose of a bioretention cell is to function as soil and plant-based filtration devices that remove pollutants through a variety of physical, biological, and chemical treatment processes.  The site is designed so that drainage from hard surface areas (roofs, concrete and asphalt paving) drain to bioretention.  From there stormwater is designed to pond and slowly infiltrate through soils designed to filter pollutants (sediments, metals and rubber) allowing stormwater to be safely discharged to Lake Washington.

By 2025, the new Rainier Beach High School will feature a modern approach to education, responsive to the needs of its students, all the while supporting the surrounding ecosystem and sustainability goals of the District for years to come.