New Wells Hall: Working together to Make the Old, New 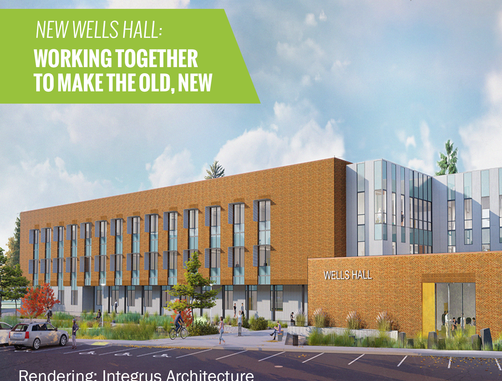 Our Spokane office has been busy working on the new Wells Hall replacement on the main campus of Wenatchee Valley College. The existing Wells Hall was reportedly the oldest building on any college campus in Washington state. In addition to civil engineering, AHBL is providing landscape architecture and surveying services while working with project architect, Integrus Architecture.

Our AHBL team teamed with the Spokane office of Integrus who designed the project to replace four of five wings of the existing single-story mid-century building with a three-story, 75,000 square-foot building. With 25 classrooms, flexible student spaces, offices, and an event center the college will be equipped with state-of-the-art spaces for instruction and collaboration. The new Wells Hall was designed as a welcoming place for prospective and first-year students. Its position at the front of campus and its orientation will enhance the surrounding outdoor spaces and draw visitors into the heart of campus.

Academically the new Wells Hall will be a dynamic learning, social, and collaborative environment which will house the campus’s Liberal Arts, Academic Advising, Adult Basic Skills, English as a Second Language, and Continuing Education Programs.

Our land surveying services included locating private utilities, developing boundary and topographic surveys, and preparing an updated survey base map for design and bidding in phase 2 of the project.

AHBL’s landscape design, led by Craig Andersen, takes the campus’ arboretum background a step further and developed a landscape design showcasing native plants of the Wenatchee region from Columbia Basin shrub-steppe to sub-alpine environments in the nearby Cascades. The courtyard and walkway designs were heavily influenced by the existence of a Giant Sequoia, approximately 50 feet tall and 4 and 1/2 feet in width. This tree, while commonly found in Redwoods National Forest, is a rarity in Washington state. Therefore, it became a centerpiece and highly celebrated feature of the design. This exciting new campus landscape will educate students, faculty, and the community about the surrounding regions.

Construction (Lydig Construction) is scheduled to be finished this summer.