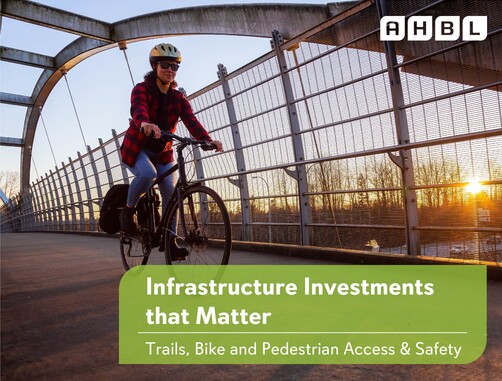 The pandemic uncovered a truth that many have advocated for years: multimodal (biking and walking) modes of transportation must be funded across the state and local levels. According to Rails to Trails, a non-profit trail advocacy and support organization, "demand for both trails, parks and more green space is surging in every community." Trail usage is up more than 200% compared to 2019.

There are compelling arguments for the economics of biking and pedestrian infrastructure investment. A national economic impact study found that the nation's 60 million annual recreational bicyclists spend $46.9B on meals, transportation, lodging, gifts, and entertainment. According to the League of American Bicycles, Washington has a Bicycle Friendly State Rank of #3 with 19 bicycle-friendly communities, 47 bicycle-friendly businesses and three bicycle-friendly universities.

Luckily Washington State Public Agencies are leading the effort and are in the process of addressing this need. In 2021, the Washington legislature adopted the WSDOT Bike and Pedestrian Plan and its Complete Streets Policy that ensures roadways are planned, designed, and operated for the safety of all people, including bikers and walkers. Since 2005, WSDOT has awarded $115.6M for 208 pedestrian and bicycle projects, which will grow substantially in the coming years.

Case in point, As part of WSDOT's Pedestrian and Bicyclist Program and Safe Routes to Schools Program for 2021-2023, they received 107 Pedestrian and Bicycle project applications from 74 agencies and organizations totaling approximately $91M, and 125 Safe Routes to School project applications from 87 agencies and organizations totaling around $99M. These programs will increase the safe mobility of individuals throughout Washington and prove that preemptive transportation planning yields many benefits and save lives by separating vehicular traffic.

AHBL’s work on multimodal transportation projects and safe routes to schools span jurisdictions across the state. This work, providing community connections through the design of trails, parks, and access to open space, started in earnest in 2011.

A capstone-type project for us was to lead a multidisciplinary team to design 13 miles of bikeway and pedestrian improvements along existing roadways throughout the City of Tacoma. The route consists of three miles of bike lanes and approximately 10.5 miles of bike boulevards. The project is part of the build-out for the City's overall Mobility Master Plan. The City of Tacoma was one of the first cities to implement a comprehensive Mobility Master Plan which envisioned an interconnected bicycle and pedestrian network that provides safe routes.

The evolution to bring conceptualized trail projects to life has been an ongoing effort in recent years. AHBL is involved in designing and constructing trails that offer alternative modes of transportation, including walking and cycling. A few recent examples include:

We are in exciting times in Washington State, where we can realize the efforts of multimodal planning for multimodal transportation that goes from the wish list to built projects for citizens and their families to enjoy for years to come. These regional opportunities connect us with safer, health-conscious, and climate-conscious choices regarding transportation.