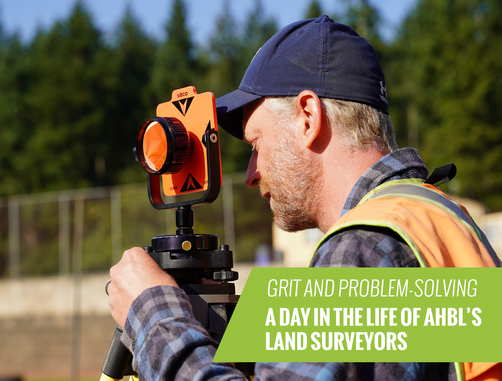 Our surveyors start the day early at 6:30AM. They meet at the office then, AHBL survey crew teams get together and take off to different project sites to perform a variety of services including construction staking, topographic, boundary, and ALTA surveys. Depending on the project’s size, they may be on-site from 4 hours, to a few days, to a month collecting data about a property.

When asked about unique challenges they have faced as a surveyor, AHBL Chainperson, Ben Dodos, said, “Every project has its own unique features and challenges to adapt to get the most exact representation of the site. We work in a variety of locations, from a typical residential lot in Tacoma, a downtown Seattle high rise project, to desert conditions with snakes, and heavily tree-canopied areas where we have encountered black bears.”

AHBL survey crews are serious about 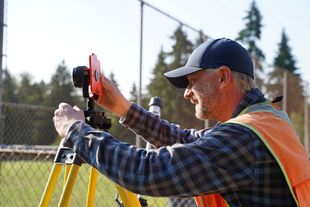 getting the information they need and sometimes that takes creativity and determination. For surveyors, the landscape is sometimes unforgiving. That might mean having to wade through thick foliage and walking long distances on rocky terrain throughout the day. They work in all environments; however, the consensus is that the challenge and being outdoors are a part of what makes the job rewarding.

Darrin Herman, a seasoned surveyor, and new member of the AHBL team noted that there is no such thing as a “routine” project. He gave an example from a previous challenge that required problem-solving and teamwork to gather the information they needed. “On a recent site there were dozens of brick pillars and we needed to capture points of every single one of them. However, it was inefficient to measure each one individually. We found a creative solution by measuring the unique pillars and working with the drafter to develop the rest of the points based off identical pillars. There are examples of finding solutions to obstacles like this on every site we visit.”

The work of survey crews is highly precise. A minor mishap in setting up the survey instruments can skew site data collection. From points that are off by just a few tenths of a foot to an unrecognizable zigzag of data points; land surveyors' success is part precision mixed with grit.

What lessons can be learned from AHBL's survey crew? Both surveyors mentioned paying attention to detail and taking copious notes were components of getting the job done well. While there are a few universities that offer 4-year Land Surveying degrees, and many technical colleges that offer a two-year degree in Land Surveying, all of AHBL surveyors learned through on-the-job training. Chainpersons who have come in “green” but demonstrate strong math aptitude, work ethic, and a willingness to learn from the crew chief and office technicians have become some of AHBL’s most respected surveyors. At the end of the day, AHBL surveyors go the extra mile to get the job done right and embrace on-site problem-solving.