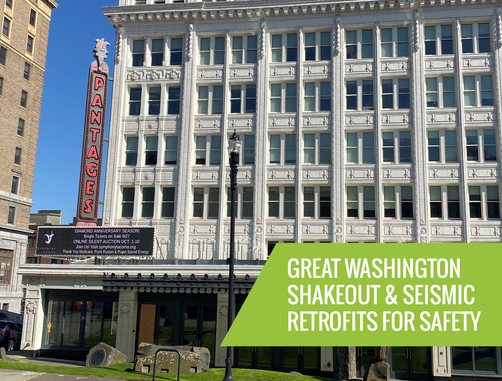 The Great Washington ShakeOut on October 21st marks the largest state-wide earthquake preparedness event with over 980,000 participants and counting. The ShakeOut is the largest-ever earthquake drill in Washington state with the goal of helping communities and residents prepare for earthquakes.

As structural engineers, we are interested in the effect earthquakes have on our state’s buildings and infrastructure. Our teams work to strengthen buildings and infrastructure before an earthquake occurs by providing Seismic Retrofits to existing buildings. When the big Nisqually Earthquake hit the Pacific Northwest on February 29, 2001 with a magnitude 6.8, it caused billions of dollars in damage.

As a result, city and county officials throughout Washington began making recommendations for unreinforced masonry (URM) buildings; historic and landmark buildings; as well as educational and life safety buildings. In 2012, the City of Seattle’s Department of Construction and Inspections (SDCI) considered a mandate for all URM buildings to undergo a seismic retrofit to reduce the risk of injury and loss of life in the case of an earthquake.

However, policy committee discussions were unable to move forward due to the prohibitive cost of the proposed retrofits. The committee met a total of 15 times to establish a policy between 2012-2017, but while it made recommendations it has not mandated seismic retrofits throughout the city for fear of displacing residents from lower income housing and overburdening owners with the cost of retrofits.

With our extensive experience evaluating existing building structures, AHBL works with building owners to develop cost effective seismic upgrade solutions. For many projects, seismic upgrades are not expressly required by the building code. For these projects, AHBL can incorporate elective upgrade elements into the project based upon the observed seismic deficiencies as well as available project budget. This approach allows the owner to get the “best bang for the buck” as it relates to the seismic performance of the building. These types of upgrades include upgrading wall anchorage at concrete or masonry walls, designing exterior furring walls as a secondary vertical load path, upgrading structural connections at exposed framing and similar improvements that can be achieved in a cost-effective manner. These types of improvements can dramatically improve the seismic performance of a building (improving safety for the building occupants) when funds are not available for a full seismic upgrade.

DNR WA undertook the School Seismic Safety Project (SSSP) in a statewide effort to evaluate how our schools would perform in the event of an earthquake. 561 school buildings were assessed and assigned a star rating with five being the best and one being the lowest rating. Ninety-three percent received one star; four percent received two stars; and only three percent were rated as three stars or better. 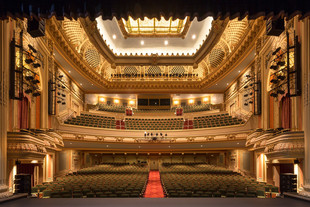 AHBL, Inc. has designed solutions for both historical and culturally significant buildings like the Pantages Theater (pictured right) and Downing Elementary School & Boys and Girls Club in Tacoma, WA. The scope for both projects involved dovetailing structural improvements with upgrades to interior finishes and other building systems.

Our structural engineers have experience designing seismic retrofit for building types likely to sustain damage or loss of life during an earthquake event such as:

As studies of risk are assessed, funding will be prioritized. Scientists predict there is about a 37 percent chance that a megathrust earthquake of 7.1+ magnitude in the Cascadia Subduction Zone will occur in the next 50 years. If it occurs, this event will be felt throughout the Pacific Northwest.