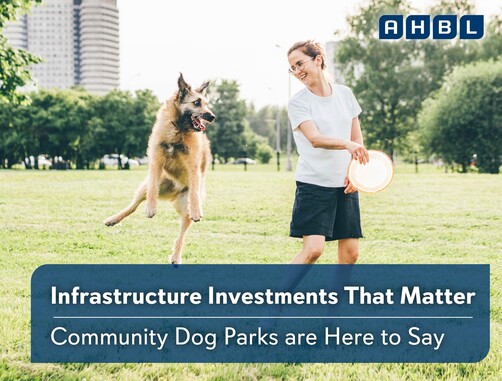 According to the Trust for Public Land, one of the fastest growing types of park amenities in cities across the nation are Dog Parks.  Many communities experience a massive surge in park use during the pandemic and recognize the need for more open space and park infrastructure. They have also seen what the American Veterinary Medical Association has stated that dog ownership across the U.S. increased by as much as 11% during the pandemic. Coming into a post-pandemic world, many parks departments have recognized the need to prioritize dog parks. The National Recreation and Park Association’s (NRPA) 2018 Agency Performance Review data show that 55% of park and recreation agencies now have established dog parks.

A Dog Park is a fenced off-leash area specially designed and designated for use by dogs and their human companions.

Across the nation, most parks and recreation facilities are either building a dog park or planning to build at least one soon.

AHBL’s landscape architects recently worked with the City of Spokane and a diverse committee of residents and veterinary experts to create site selection and development standards for the city’s dog parks. As part of this work AHBL completed feasibility analysis and concept designs at three potential locations for a new community dog park. Our work has defined three types of dog parks for the City of Spokane:

For both the Community and Neighborhood Dog Parks, AHBL landscape architects developed the following site features into the standards:

The top priorities are that the dog park must be clean and sanitary, have a natural appearance, and provide ample shade.

With a current dog population in the City of Spokane already estimated at around 150,000, the City is looking forward to creating more dog parks for dogs and humans alike in the near future.