Can we do better? The State of Infrastructure in Washington 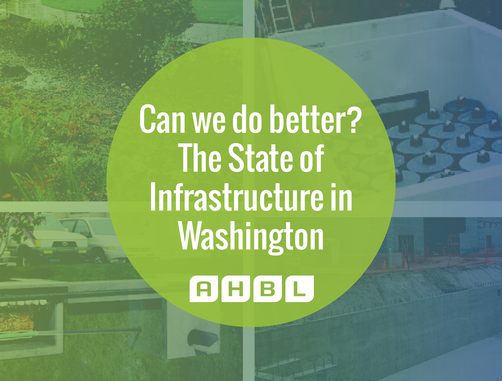 We’ve heard for years that the state of America’s infrastructure is failing nationwide. President Biden’s Infrastructure Investment and Jobs Act that passed last November is poised to bring funding to address some of the needed infrastructure. However, we believe the distribution of funds will take time as government agencies are not prepared for this influx of dollars. For example, DOT only spent about 9% of its allocated ARRA funding in the first six months and around half of its funding in the first 18 months.

The Most Recent Washington Infrastructure Report Card gave Washington an overall grade of a C. This report from the American Society of Civil Engineers wasn’t just rating bridges and large sections of highways, but also deficiencies on vital infrastructures like wastewater (C-) and stormwater (D-).

Stormwater is an area that AHBL engineers are keenly aware of and committed to working on innovative ways to filter and control stormwater in Washington State. According to the report, “underinvestment at all levels of government threaten our competitive advantage and the health, safety and welfare of our residents.”

Since the report card came out five years ago, innovations in stormwater treatment and the approach to handling runoff for projects in Washington have progressed. Todd Sawin, PE, a principal in our Tacoma office, works with municipal clients throughout the state to develop stormwater solutions. He has developed stormwater plans for public and private facilities as well as Stormwater Management Action Plans (SMAP)s to prioritize stormwater retrofits that will have the most impact on the watershed or basins studied. “AHBL is committed to finding long-term solutions to stormwater pollution by working with our agency partners to create innovative programs that reduce overall impact to the watersheds in our communities,” said Sawin.

According to the report card, “stormwater runoff is the most significant source of non-point pollution entering natural waterways in the United States. In urban environments, it picks up contaminants from the surface such as debris and brake dust in the streets. In rural environments, the most concerning pollution is runoff from agricultural fields.”

Washington can do better when it comes to education about stormwater and innovative ways to treat and release it in the future. The burden of this education falls on all of us with knowledge of the problem. We must all do our part to make the impact of our projects today lessen the impact on our environment.