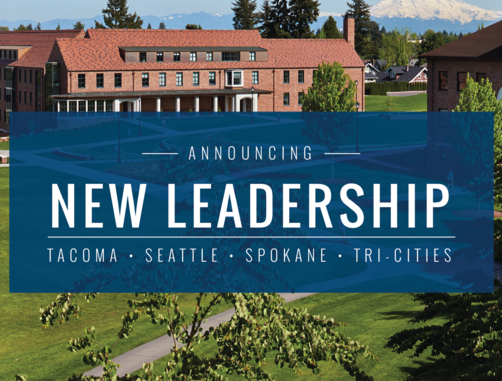 AHBL is excited to announce our new president, past president’s new role and the addition of three new principals.

After a year of preparation, Doreen and Dan will be taking new roles within the leadership of AHBL. Doreen Gavin, PE, LEED AP will be the past-president effective January 1, 2021 but will remain a principal and active and instrumental senior leader. The executive board of AHBL has named Dan Booth, PE, SE as president of AHBL effective January 1, 2021. Dan has been a principal with AHBL for 32 years and has led our structural engineering teams with vision and leadership, making him a natural choice. Civil engineers Bill Fierst, PE, David Nason, PE, and Erick Fitzpatrick, PE were promoted to AHBL Principals. Each brings enthusiasm and passion for civil engineering and will help guide the future of the company.

President - Dan Booth is a natural-born leader and has been shaping the culture at AHBL for over 32 years. He has served as a principal for over 15 years. As a survivor of four economic recessions, he is a perfect choice to lead us through 2021 and beyond as we face new challenges as well as opportunities. Dan earned both his B.S. in Civil Engineering and his M.S. in Civil Engineering from the University of Washington. Dan’s technical skill set includes a deep understanding and respect for structural engineering for both public and private clients. His projects range from municipal, education, recreation and commercial/industrial projects. Dan is known for his calm, reassuring demeanor and wisdom gained through experience both professional and organizationally.

Past President – Doreen Gavin. Doreen has served as AHBL’s president for 8 years. Doreen and Dan have been working together for the past year to ensure a smooth transition. As Doreen moves into her new role as principal and mentor to young engineers with more time for client marketing and teaming facilitation, she is excited about the opportunities to come in 2021.

“My time as president of AHBL has been the highlight of my professional life. It has been full of exciting opportunities and experiences from seeing projects come to life to watching our staff grow into the professionals that they are.  I am humbled by the trust that has been extended to me, and I am proud to have been a part of the growth and direction of our firm.”

While her focus is shifting, her commitment to her partners, clients and project work remains steadfast.

Principal - David Nason’s deep resume of educational facility design reflects his passion for projects that will improve his community. He’s spent the past 13 years of his 22-year career as a civil project manager in AHBL’s Tacoma office and he calls Tacoma home. He is currently working on landmark alternative-delivery projects in the South Sound which includes the IDP delivered Mary Bridge Children’s Hospital, as well as the University of Washington Tacoma’s Milgard Hall. David enjoys volunteering at Parks Appreciation Day and mentors our junior-level engineers.

Principal - Bill Fierst is a highly detailed-oriented engineer who is known for the thoroughness and quality of his work. His 20-year civil engineering career at AHBL has allowed him to contribute to a wide variety of education, federal, healthcare, and commercial projects.  He is a native of the South Sound. He’s currently working on the new Chinook Elementary School for Auburn School District and the Lakehaven Utility District Headquarters in Federal Way. He particularly enjoys working on projects at Joint Base Lewis-McChord, which includes his current work on the Design-Build, Joint Regional Confinement Facility (JRCF). His commitment to AHBL’s federal clients is demonstrated through his position as Secretary for the Mount Tacoma Post of SAME.

Principal - Erick Fitzpatrick joined AHBL in 2012 and his promotion to Principal is a testament to his skill and ambition. He has 14 years of experience and oversees civil engineering in AHBL’s offices in Spokane and the Tri-Cities. He is a native of Spokane and enjoys projects that improve the Inland Empire’s communities. From his work for Spokane Public Schools, Spokane Public Library, Wenatchee Valley College, and beyond, Erick has a strong understanding of working with public agencies. He’s currently working on the new South Middle School and design for professional housing for the Colville Tribe.