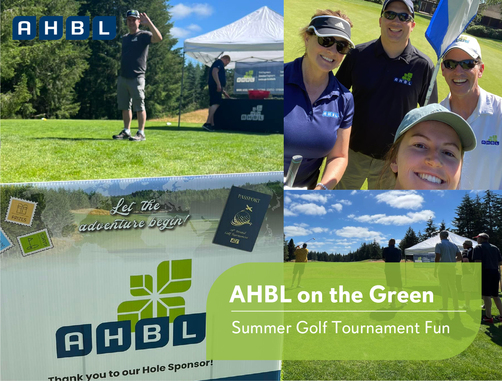 What better way is there to spend sunny summer days, within the A/E/C community than hitting the golf course together? These past few months, AHBL has had the pleasure of sponsoring and joining five organizations out on the green. Check out the highlights of these events! 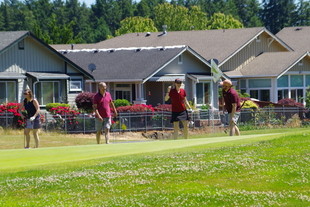 Pete Gonzales, PE represented AHBL and shared his talents golfing at the AIA SWW tournament. He was paired with players from Cairncross/Hemplemann (Seattle attorneys) and an architect from Treanor HL out of Vancouver, WA.  AHBL also handed out goodies and trinkets from a sponsor booth on the course.

Gonzales remarked, “We had a lot of fun and some great conversations as we battled our way around the course on the gorgeous sunny day eventually settling for a remarkable perfect par card – all pars . . . no bogeys, no birdies, 18 straight pars. Though we were able to record getting on the board for the individual hole prizes for long drive, closest to pin, and others, someone else came in after us to claim those prizes.”

Larry Higgins, PE, SE, and Ken Leland, PE, SE manned the sponsor table at the BIG Invitational held this year at Meridian Valley in Kent, WA. Higgins shared, “It was great meeting up with a lot of clients that I haven’t seen for a few years or ones that I’ve only talked to through emails and phone calls.”

The tournament raised over $125,000 for youth and mentors in Big Brothers Big Sisters King, Pierce, and Kitsap counties! 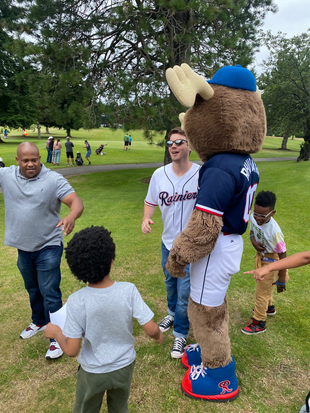 Hansen recalled, “Korsmo hosted a great event, and it was really cool that the kids were there at the beginning of the event that benefited from the proceeds of the tournament.”

Caroline took away the “Longest Drive for Women” on one of the holes, her first official time playing 18 holes! 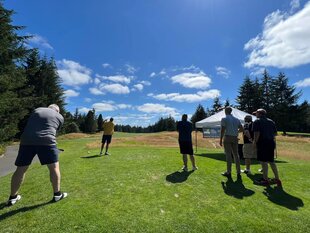 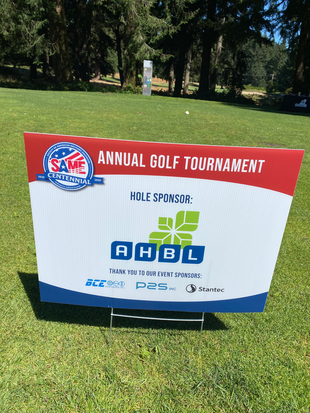 AHBL had the opportunity to sponsor and attend SAME’s Steve Woolery Annual Scholarship Golf Tournament which was held at Eagle’s Pride Golf Course in Dupont.

Ken Leland shared, “After a cool start to the morning, it was another beautiful sunny day. It was a great chance to be out on the golf course and support SAME scholarships for students in the fields of Architecture, Interior Design, Engineering, Construction Management or Science.”

In dedication to Steve Woolery and his achievements in the A/E/C industry, the Mount Tacoma Post Scholarship Program’s annual award has been named in his honor.