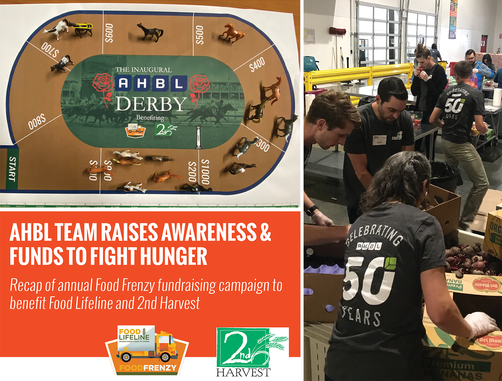 In a year unlike any other, AHBL not only stood fast to our commitment to supporting local food banks - we broke records!

Now in our 11th year of participating in Food Lifeline's annual Food Frenzy fundraiser, we set forth on our first ever entirely virtual charitable giving campaign. Themed around the Kentucky Derby, The AHBL Derby Fundraiser divided the company into teams of 5-7 employees, led by a Principal or Director. We set a goal of $1,000 raised per team, and it was off to the races!

After four weeks of hard-fought competition, it was team #8, led by Principal and President Doreen Gavin, who took home the crown for most money raised at a whopping $1,730. Not far behind her was Team #11 (led by Dave Follansbee - Land Survey Principal) with $1,000 and Team #4 (led by Bill Fierst - Civil Engineering Associate Principal) with $675.

In total, AHBL employees raised more than $7.500 for Food Lifeline. This in addition to our Eastern Washington offices, who partnered with 2nd Harvest for a local fundraiser of their own. This stands as a high water mark for AHBL, and speaks to the uncommon generosity and competitive spirit of our employees.

Thank you to all those who helped us make a difference in our communities! If you would like to learn more about Food Lifeline, please visit https://foodlifeline.org.