AHBL Landscape Architecture Featured at SAF’s “Because it Rains” Exhibit 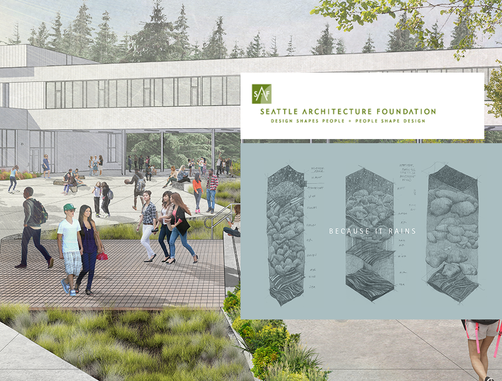 In 2017, design for Shoreline School District’s, Kellogg Middle School replacement began and the possibility to reconnect and recreate the headwater condition that once flowed through the site became a possibility. Inspired by the site’s topography, forested hillside and proximity to winding community trails, AHBL’s landscape architecture team, in collaboration with Mahlum worked to design a bioretention ecosystem that returned stormwater to the tributary in ways that emulated the previous condition.

The courtyard rendering below begins to describe how the bioretention cells flow through the interior courtyard of the school to enhance the overall health of the seasonal tributary and the Thornton Creek watershed in which it feeds. The interior courtyard is the green heart and focal point of the school, which the commons, library and classrooms look into. Stormwater from the buildings’ roofs are channeled into the courtyard’s bioretention cells, which then flows under pedestrian bridges, past shade dappled native plantings, on to Thornton Creek, and eventually feeding into Lake Washington.

With this work, the courtyard design aims to create a connected thread of living systems (aquatic, terrestrial, and human) providing a home for numerous species and an opportunity for students, staff, and faculty to witness, learn, and co-exist.

To learn more about rain gardens and other forms of green infrastructure, join SAF and AHBL for an interactive workshop and exhibit celebration on Tuesday, May 21st at the Center for Architecture & Design in Seattle, WA.