It's a Long Story | Long-Time AHBLers Share Their Journeys 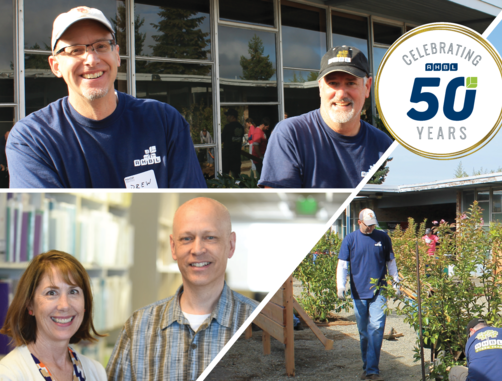 Everyone’s path is different, and a career often has twists and turns along the way.

Prior to our 50th Anniversary Party, some of our senior team members shared their stories of how they came to be part of the AHBL family. Here are just a few...

Wayne Carlson had only been living in Washington State for three weeks when Len Zickler and George Lindsay offered him a position with AHBL in 1994. In the final years of life before the internet took over, Wayne had found an advertisement in the Seattle Times and took the interview in spite of knowing nothing about the company. His early experience with AHBL was unique in that he played witness to the transition from analog to digital in the company’s work. One of his first impressions of the company was how lacking in computing power it was. When he started, the combined Planning and Landscape Architecture department shared just two computers among them and drafting was approximately 50-50 hand drawn versus CAD. In fact, Wayne had more computing power in his apartment than the department had in total. Within three years, all that would change, and there would be only one manual drafter left with the company. Another key shift during the early years of Wayne’s tenure with AHBL has been the adoption of the Washington Growth Management Act and its effect on long range planning. In 1995, Wayne took part in the City of Milton’s Comprehensive Plan update, the first under the new legislation. Nearly 25 years later, this project stands as a cornerstone of AHBL’s planning portfolio.

Ken Leland wasn’t exactly looking for a career in 1998. Instead, the senior engineering student at the University of Washington was mainly focused on the success of his concrete canoe team – a group of students who would go on to place 5th nationally in intercollegiate competition. But after seeing an advertisement for AHBL in an all-campus email, he was intrigued with the mid-size firm. Even though he wasn’t familiar with the company, its size and location in the South Sound presented greater opportunity for a young engineer. With that in mind, he followed up on the advertisement and was hired on following graduation. Founding partner Geoff Hodsdon was still a strong presence in Structural at the time, and Ken was quickly thrown into the deep end – receiving hands-on design experience when many of his peers elsewhere were tasked with busy work. He quickly came to appreciate the small firm feel and family atmosphere of the company and his initial hunch about the opportunities presented in Tacoma proved correct. While he credits these things with his success at AHBL, there is one thing that has changed dramatically: something Ken recalls vividly from his first days with the company is the email system (or lack thereof). With only one account for the whole company, emails were printed and hand delivered to each person.

Bill Fierst earned his degree in civil engineering at the University of Washington around the same time as Ken Leland. While not particularly close, they were acquainted with one another on campus and Bill knew Ken had taken a job with AHBL in the summer of 1998. That was to be his only familiarity with the firm until he too came across an advertisement in yet another fateful department email. At that time, AHBL only maintained an office in Tacoma; this appealed to Bill since he believed it would provide the opportunity to gain direct experience rather than general task work. He entered the civil department under Doreen Gavin, but one of his earliest memories was of George Lindsay, who complimented him on his necktie (one which he also owned) and then made him promise to never wear it again. It was this lack of stuffiness which Bill believes is central to the success of the company after 50 years. As he puts it, “We don’t take ourselves too seriously, but we get things done.”

Another product of the University of Washington, Civil Engineer Doug Tapp took his talents east for three years following graduation, applying his trade in Idaho and gaining experience in the public sector. It was a friend from his college days that made his return to Western Washington possible; former AHBL engineer Dan Shaw reached out to Doug and asked him if he was interested in a position with the firm, and in 1997, he took the offer. His earliest days with the company felt like drinking from the fire hose of engineering knowledge by George Lindsay (the "L" in AHBL), and he recalls thinking there was a gargantuan amount of information to learn quickly about various aspects of civil site design and the things important to the clients AHBL served. Without the benefit of email or the internet, much of this learning was done the old fashioned way – lots of reading, questions, studying drainage design practices and permitting requirements, and in-person interaction with clients. This was a large adjustment from his time in Idaho but Doug took to it with gusto, and was soon cutting his teeth on uniquely challenging projects such as the Underwater Equipment Lab in Bayview, ID the Missouri Botanical Garden in St. Louis, MO and a particularly memorable Fred Meyer store in Anchorage, AK.

Unlike most of our Principals, David Follansbee never actually interviewed with AHBL. Instead, he joined the company when J. Becker and Associates merged with the company in 2001. This merger solidified the company’s survey program, thereby rounding out the five disciplines the company offers today. But just because the company inherited Dave doesn’t mean he was spared the traditional introductory tour on his first day. But in spite of the flurry of new faces and introductions, the transition went off without a hitch and from Day One and he remembers feeling as though the John Becker and Associates team had always been a part of AHBL. The survey department’s culture then – as now – tended to be fun and energetic, and he was presented with further opportunities to complete projects that are meaningful to him, including the work AHBL has done at JBLM to improve the residential housing and barracks.

Hailing from the frozen north of Alaska, Tim took a creative career path before he found his way to AHBL.  Graduating from UCLA with an electrical engineering degree, an economic downturn forced him to crunch numbers as a 401(k) consultant in Seattle for a few years before going back to school to earn  his Master’s Degree in engineering and his MBA from the University of Washington. After graduating, he returned to Alaska to work with his father in the family civil engineering business. After becoming waterlogged in Alaska after 5 years, the time came to make the move back to the Lower 48 in 2003 where he set his sights on the South Sound and AHBL. The stormwater requirements of southeast Alaska were lax compared the rigorous western Washington standards and the typical project size at AHBL was larger and much more complex so the learning curve was steep in those first years. Sixteen years later, he hasn’t missed a beat as he moved from the production side to lead the operations side of the company and earn the position of Chief Operating Officer. He credits his longevity here to great people and great projects.

David Nason had his sights set high when he landed with AHBL in 2006. The University of Vermont graduate had been working for another firm that had not yet allowed him the opportunity to work on big projects, due mainly to their limited market. AHBL was a growing company and offered exactly what David was after. When he arrived, AHBL’s Tacoma office was in the midst of a dramatic renovation, requiring a handful of employees – including David – to office in an “Annex” a few blocks away. While he was initially disappointed to not be working in the main office, he came to appreciate the teamwork that defined AHBL. When obstacles arose, he always found someone willing to help; from the admin staff to the principals, he could always find someone eager to answer questions or help in any way possible. In this way, his time in the Annex was made meaningful as he became part of the company’s fabric in spite of the temporary exile down the street. This was best exemplified only two months into his tenure with the company, on the eve of his wedding. Even as a relative newcomer, he was presented with the customary card and generous wedding gift from his coworkers. This moment sticks out to him as one of the defining memories of his early days here, and cemented his confidence in his decision to come west.

Todd Sawin holds the unique distinction of being the youngest engineer to become a Principal of AHBL, and has spent his entire career with the company. After earning his degree in Civil Engineering in Pullman, the Washington State graduate was eager to jump into the deep end and put his education to use in his chosen field. AHBL represented an opportunity to dig in immediately, and he leapt at the opportunity to return west near his hometown of Puyallup. Right out of the gate, he found AHBL’s established engineers eager to have him work on their projects, and he developed a strong understanding of the balance necessary to meet the workload without becoming burned out or overwhelmed. It was this equilibrium which allowed him to learn what motivates the company’s clients, including their fears, needs, and goals. Much of this, he learned from Founding Partner Al Bessette (the "B" in AHBL), whose philosophy of client engagement Todd continues to teach to up and coming engineers.

Joyce Bell is one of AHBL’s longest-tenured employees, having been with the company for nearly 28 years. A fixture in the accounting department, Joyce has had numbers and figures in her blood for most of her life. Getting her start running the front counter and taking orders and payments for her family’s photography studio, she found a knack for accounting that brought her to AHBL in late 1991. At that time, the company consisted of only civil and structural engineering and she represented just the thirty-fifth employee. Three days after she arrived, founding partner Noel Adams retired, closing the first chapter of the company’s history. She joined an accounting department of one, with one database shared between them. This shared resource resulted in a peculiar daily ritual in which a pink Post-It note was moved back and forth between their computers to signify who had access to the active database at a given time. While much has changed over the years, Joyce has been a constant presence and continues to strive to make AHBL a great place to work.