Celebrating 50 Years | A Look Back at the Year's Highlights 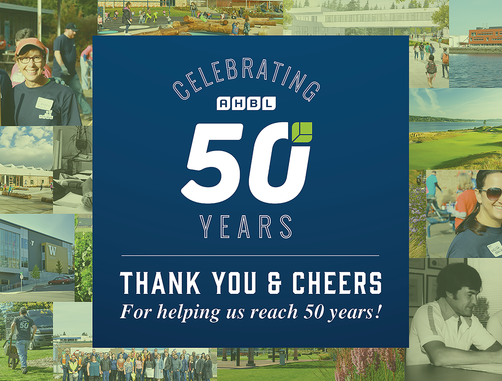 AHBL kicked off our 50th Anniversary celebration in May, and the one word we keep coming back to is, “grateful.” We can’t beat this drum enough – we are grateful for all of the relationships we have developed throughout our years of business, grateful for the warm wishes and congratulations we have received over the course of the year, grateful to all the employees and their families who have stuck with us over the years…the list goes on and on.

We wanted to capture this spirit in a way that was unique to AHBL. For the last several months, we have commemorated our 50th anniversary in a number of ways, being mindful to connect them to the themes of reflection, service, and celebration. Here are a few highlights.

Our semi-centennial offered a great opportunity to appreciate just how far we’ve come. We took the time to reflect on how AHBL’s story unfolded and how a structural engineering company founded 50 years ago has grown to include civil engineering, community planning, land survey, and landscape architecture to its repertoire. As we flipped through archived photos from holiday parties past, spoke with founding partners, and had conversations with long-time AHBL’s employees to get a grasp of how the company has evolved, a couple of themes were resounding: AHBL digs deep to distinguish itself as a regional leader and is deeply committed to its clients, employees, and the communities in which it works. Every step along the way has been grounded in an appreciation of who we are and how we got there.

In celebration of this milestone, all four AHBL offices participated in a Week of Service to give back to the communities in which we work. As a longtime partner of Food Lifeline and an annual participant in their yearly Food Frenzy, we decided to dedicate our Week of Service to fighting hunger across the state of Washington. In the past, AHBL team members have been frequent volunteers with Food Lifeline and donated money to the cause, but 2019 marked our first coordinated effort to volunteer as a company and take a hands-on approach to stopping hunger in our home state.

Over the course of seven days – from July 19th to July 26th – our offices partnered with Food Lifeline (Seattle), St. Leo’s Food Connection (Tacoma), and 2nd Harvest (Spokane, the Tri-Cities) to sort, package, and distribute enough food to serve more than 20,000 meals and prepared meals for countless more at the prep kitchen in Tacoma. In total, more than 80 AHBL volunteers stepped up and contributed to the effort, taking time out of the office not only to help our partner organizations but to learn more about the challenges facing our friends and neighbors. Their impact – nearly 200 hours of cumulative service – went a long way in demonstrating the positive effect we can have in our communities.

In September, we gathered along the Thea Foss Waterway in Tacoma in the company of nearly 200 AHBL employees, retired partners, and clients new and old to toast AHBL’s 50-year history and welcome continued success. AHBL President, Doreen Gavin, gave the evening's keynote remarks, noting the shared feeling of gratitude around which we have marked this milestone. She praised the continued excellence of our staff and expressed her hope for the future of AHBL, including continued growth, inclusivity, and community involvement. Most importantly, she ended with a challenge to the AHBL family celebrate once again in ten years, twenty years, and beyond.
Back To News